These days it’s important to stand out from the crowd. You can see that the press department of Sony Pictures were thinking exactly that when they were planning the press launch of Brad Pitt’s new film ‘Fury’. The film is set during World War II and is based around Brad Pitt’s character ( Don “Wardaddy” Collier) and one of the final ally assaults on Nazi Germany. Pitt’s character commands an M4A3E8 Sherman tank named ‘Fury’. Hence it was decided that it would be a great idea if the global press launch for the film was to be held at the National Tank Museum in Bovington, Dorset.

The museum was established in 1924 and houses a vast away of tanks from World War One to the present day. This surely would capture the world’s press imagination and bring the film to life? Undeniably this was a radical departure from boring press junkets in central London. But it did bring some last minute challenges for production and communication specialists Jack Shoot, who were brought in by Sony Pictures one week before the launch. 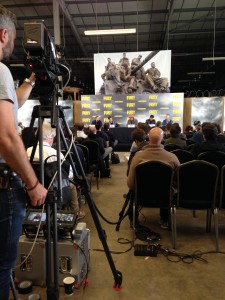 Connectivity! Jack Shoot to the rescue.

Jack Shoot have been specialists in capturing and delivering content to a range of digital platforms since 1998. They have an experienced team covering production, post production and content distribution, providing their clients with a complete end-to-end solution. Working around the world, the U.K, based company has assisted their broad client base with production and connectivity solutions ranging from events such as the Olympic Torch Relay through to working with major film studios as was the case here.

As the planning for the event in August 2014 reached it’s final stages, it became apparent that the broadband and broadcast infrastructure at the Tank Museum would be insufficient to host the world’s media. Not unreasonably Sony Pictures wanted broadcast clips and still images from the launch to be immediately published and broadcast in the world’s press on that day – to maximise the impact of the launch. It would reduce the effectiveness of the press event if journalists and broadcasters took their images and broadcast packages back to London a day or two later.
So how do you bring the type of connectivity associated with a major city corporate environment or broadcast studio to a remote location in the middle of the country? This is where Jack Shoots expertise and long association with Dawson came in to play.

Using their Mercedes Vito vehicle which had been fully transformed and integrated by Dawson in to a mobile transmission and communication hub, Jack Shoot were able to provide a local press network on site to maximise wifi and broadband coverage for the world’s press. They were also able to establish a broadcast and IP data transmission path from location to Sony Pictures IT department back in London. This then enabled global on pass for both live and recorded packages both to Sony worldwide, but also to the world’s broadcasters.

Simon Haywood, Managing Director of Jack Shoot mentions “our long association with Dawson has meant that we have been able to offer a full satellite delivery service option to our clients at a moments notice. The flexibility of the vehicle based transmission solution means that we can be in the middle of nowhere and still provide two way connectivity with full broadcast quality bandwidth.”

KASat – A flexible and robust solution

For this event, the solution involved using Dawson’s self-pointing KA band antenna. Type approved by Eutelsat for use with their popular KA-Sat satellite, the antenna can be deployed within two minutes. It can then immediately be delivering transmitted data or images to satellite which are then downlinked and deployed to a specified IP address or data collection point. The flexibility of KA-Sat meant that a transmission bandwidth of 6mb/s was easily achievable whilst still delivering a return path to provide 4mb/s of broadband connectivity.

The alternative technical solution of hiring a traditional Ku band SNG vehicle would have seen a substantial increase in costs and it would not have met all of Sony’s requirements for on site broadband either. As Jack Shoot have been working with this vehicle for over four years now they had a unique understanding about its potential and flexibility.

Jack Shoot chose Dawson’s fully integrated Mercedes Vito broadcast solution allowing it to transmit up to 10 channels of HD-SDI should it be required. The flexibility of the Dawson integration means that production companies, broadcasters and corporate organisations can have the exact amount of equipment they need within their vehicle allowing it to be highly specific to the client needs.

Ian Dawson, Managing Director of Dawson adds, “ we are delighted that Jack Shoot were able to use their expertise and experience to provide Sony Pictures with a perfect solution for the press launch of ‘Fury’. We are glad that our antenna and vehicle integration were a key element of the equipment used on the day and we look forward to working with Jack Shoot on future events.”