A Flyaway future for KA?

At the start of December 2016, Dawson celebrated their 20-year anniversary. Throughout the last 20 years we have definitely seen a lot of changes in the world of broadcasting. However one of the reasons that we are still around today is that we have always listened to our customers and responded to market demands to make sure that our products and services are exactly what our clients need.

In 2016 we are one of the most successful manufacturers of Ka-band mobile antennas in Europe, but back in 1996 it all started off in a rather different sector of the industry. Ian Dawson, CEO and founder of ‘Dawson’ had been working as MD for a US SNG manufacturer but had made the decision to start up his own company. Whilst harnessing the transmission and manufacturing skills from his successful career to date, Ian found that Dawson was soon in demand to provide full turnkey teleport installation services. One of the first full installations was Kingston’s teleport on the outskirts of London, (now part of Arqiva). Following on from the success of that build, Dawson gained new contracts for both C-band and Ku-band antenna installation at RACAL’s teleport for the Foreign and Commonwealth Office. Further teleport development was also provided to ntl communications in Winchester, (also now part of Arqiva’s infrastructure.) 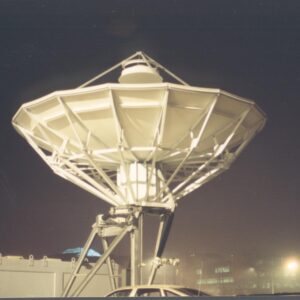 It was ntl who first turned to Dawson to ask if we could help them with building them some Ku band SNG trucks. This brought in a period of change for the company as we successfully moved the focus of our business to truck manufacture and maintenance. Our early clients included the BBC, who are still a trusted customer today. 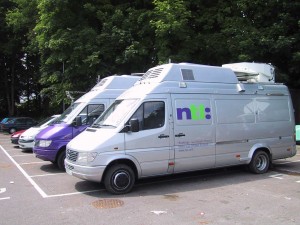 One of our first ntl Ku band SNG’s

The broadcast market in the 2000’s were pretty much still focused on Ku-band news trucks that would need a fully qualified satellite engineer to operate them. Therefore when Dawson approached ‘BT Broadcast Services’ back in 2002 with a concept of a managed broadcast network tied to a new, smaller, more efficient breed of satellite truck – they loved the idea and one of the most successful mobile contribution partnerships was launched in the form of ‘BT Satnet’ – Using BT’s global reach and customer base and Dawson’s technological expertise, ‘Satnet’ pioneered the concept of auto point antennas’ working to fixed satellite capacity within a closed managed network. At the time, this was revolutionary as the cost of a ‘Satnet’ vehicle was about one third of the cost of a traditional Ku band SNG. The partnership saw ‘BT Satnet’ launch across Europe and the USA with many units being sold to major broadcasters on both continents. 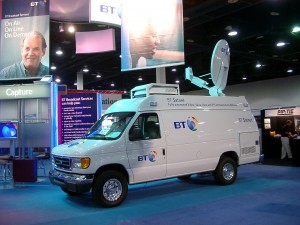 Dawson continued to sell Ku-band antennas and manufacture trucks in it’s own right throughout 2000-2010 – But as we have always been keen to lead rather than follow the market, Ian Dawson began to investigate the potential of Ka-band as a means for both contribution and distribution of broadcast content. Working in collaboration with Eutelsat, Dawson developed a lightweight, fully auto pointing KA-Sat antenna that quickly passed Eutelsat’s rigorous type approval tests. That antenna, built back in 2011 was the forerunner to the agile antenna and flyaway that are our most successful products that we have for sale today! We’ve also extended our market coverage to embrace corporate communications and mobile wifi with our professional range and the launch of our corporate division ‘DawsonGO!’ at the beginning of 2016. It was also quite fitting that in our 20th year we were awarded the prestigious Queen’s Award for Innovation for our Ka-sat antenna – a fantastic way to round off our first 20 years! 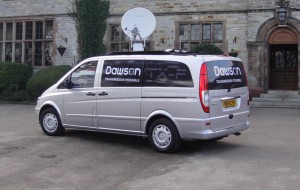 Up to date with our award winning Ka-Sat antenna

So what about the next 20 years? Well it’s difficult to look that far ahead, but Ian Dawson commented that the next few years “will see the market move to more portable and lightweight transmission solutions offering higher data rates and throughput.” He adds, “ Clients will always be looking a reliable, high quality and cost effective means of connectivity. As long as we continue to offer this in whatever form the market requires, you can be sure that there will be a Dawson around in another twenty years time!”